Experimental Film as Psychogeography
Handout Program Notes =
Gerry Fialka's interactive discussion involves the participants as urban explorers (aka flaneurs) redefining cinema with new metaphors and questions. Psychogeography was defined in 1955 by Guy Debord as "the study of the precise laws and specific effects of the geographical environment, consciously organized or not, on the emotions and behavior of individuals." As a group, we delve into avant-garde filmmakers Dziga Vertov, Chris Marker, Agnes Varda, Bill Brown and Theo Anthony, investigating public environments, surfing the net; and emphasizing playfulness and "drifting". We will probe the hidden psychic effects of film experimentalists via Marshall McLuhan, who observed "A movie camera carries your eyes out on your feet into the world - it's mobile." As detectives and strollers, we can flip the Internet's immersive environment and socially engineer the global theater.
To be presented at The Ann Arbor Film Festival March 20-25, 2018 https://www.aafilmfest.org
Program Notes/Handout= http://laughtears.com/psychogeology.html
"Not all those who wander are lost." - J. R. R. Tolkien
Experimental filmmakers can be expert readers of signs. They are redefining the form of cinema with new metaphors. Their explorations into social engineering delves in the sociology of perception. The filmmaker as flaneur evokes the influence of William Blake on the roots of psychogeography. Blake wrote, "We become what we behold."
McLuhan reworded Churchill's maxim by substituting the word "tools" for "buildings" -- "We shape our tools, then they shape us." We can invent words, buildings, cities, cell phones, whatever. Their hidden psychic effects shape our behavior. Artists can wander and wade in the waters of these effects. As antennae of the race, they can reveal them. We can learn to cope with these effects by strolling with experimentalists.
Theo Anthony's dad would take him on "improvisational adventures", as he used to call family field trips. This evokes the flaneur. Fialka's paramedia yoga session is inspired by Walter Benjamin's analysis of Charles Baudelaire's Symbolist poetry. Benjamin described the flâneur as the essential figure of the modern urban spectator, the detective, the investigator, the stroller.
"As the embodiment of modernity, the figure of the flâneur is closely associated with our conception of nineteenth-century urban experience and of Paris, the city where Balzac originated. Variously defined as a fashionable idler, a leisurely stroller, an expert reader of urban signs, an artist or writer, and a sociologist avant la lettre, the flâneur remains as multifarious and elusive as the city with which he is associated." - Aimee Boutin.
Edgar Allen Poe influenced the Symbolists with his reasoning backwards, and effects-precede-causes. Turn stumbles into the dance of McLuhan's probing the "epiphanies in everydayness," as articulated in James Joyce's Finnegans Wake. Joyce wrote: "Where the hand of man never set foot."
Anthony studied with Werner Herzog. As a writer, photographer and filmmaker, his work has been featured in The Atlantic, BBC World News, and Vice. The New Yorker’s Richard Brody called Rat Film, Anthony’s first feature, "one of the most extraordinary, visionary inspirations in the recent cinema."
In the tradition of fellow Baltimore artists like Edgar Allen Poe, John Waters, Frank Zappa, and tENTATIVELY, a cONVENIENCE, Theo Anthony probes the human condition ala rats in the inner city. His debut feature film Rat Film delves deep into "It ain't never been a rat problem in Baltimore. Always been a people problem," as articulated by philosopher king/rat exterminator Harold Edmond. Anthony's documentarian approach astonishes the viewer with his motive: "to explore the in between." This recalls McLuhan's quip, "the gap is where the action is."

Theo Anthony's Rat Film illustrates how the collage essay film can conflate Wikipedia, old documents, Google maps, video games, VR, physical models, cell phone footage, abstract imagery, traditional talking head documentary tropes and more into a "center without margins" living organism. Rat Film evokes the net as the GAF (Great American Film). One cannot make the GAF (Great American Film). The Net is the GAF. Great art is not ahead of its times, it is its times. Anthony is living in the present and writing a detailed history of the future? Hear Fialka's interview with Theo Anthony here: https://archive.org/details/ZOOM0001_20171025
Gerry & Will article: Rat Film Finds People Problems and Film Ideas
Marshall McLuhan’s Tetrad: 1) What does it enhance or intensify? 2) What does it render obsolete or replace? 3) What does it bring back that was previously obsolesced? 4) What does it become when pressed to an extreme, what does it flip into? We are probing the psychic and social effects of the environments created by the invention. Every invention (from roads to philosophy to cellphones to cities to filmmaking to written word to spoken word to bike paths, etc)  generates environments that provide services and disservices, and none of them reflect how the invention was originally intended to be used (= its content). For example, the CAR: ENH= private mobility, OBS=horse & buggy, RET=knight in shining armor, REV=bomb, home, traffic jam.
These program notes are mosaic writing...I'm wandering here...hEAR...do you see what I'm saying?....do you hear what I'm seeing?...is self-reflecting the very nature of the subject CONveyed in the words?...
"I have nothing to say and I am saying it" - John Cage
"I've got a move that tells me what to do" .... "Get on the good foot" - James Brown
"I've got a move that tells me what to film" - Geritol Fialkaseltzer
"Sculpture as place" - Carl Andre
+++++++++++++
Gerry Fialka - Artist, writer, and paramedia ecologist lectures world-wide on experimental film, avant-garde art and subversive social media. He has been praised by the Los Angeles Times as "the multi-media Renaissance man." The LA Weekly proclaimed him "a cultural revolutionary." pfsuzy@aol.com 310-306-7330 http://laughtears.com/
Ann Arbor Film Festival founder George Manupelli is in Fialka's new book Strange Questions: Experimental Film as Conversation https://www.facebook.com/events/1529264643829420/ Book Event March 26 at Crazy Wisdom Bookstore in Ann Arbor Michigan
"A Fialka workshop can be a life changing experience. He engages the participants with round-robin questions, subconscious-stimulating games, and improv group storytelling."  - Artist/filmmaker Nicole Macdonald
"McLuhan talks about media as extensions of our sense organs, and that's precisely what a workshop with Gerry Fialka is like. Gerry extends and enhances our ability to perceive the world. Did I also mention that Gerry is a hell of a lot of fun?" - Award-winning filmmaker Bill Brown
+++++++++++++++ 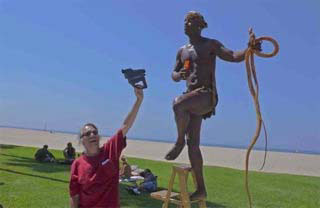 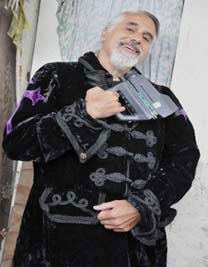